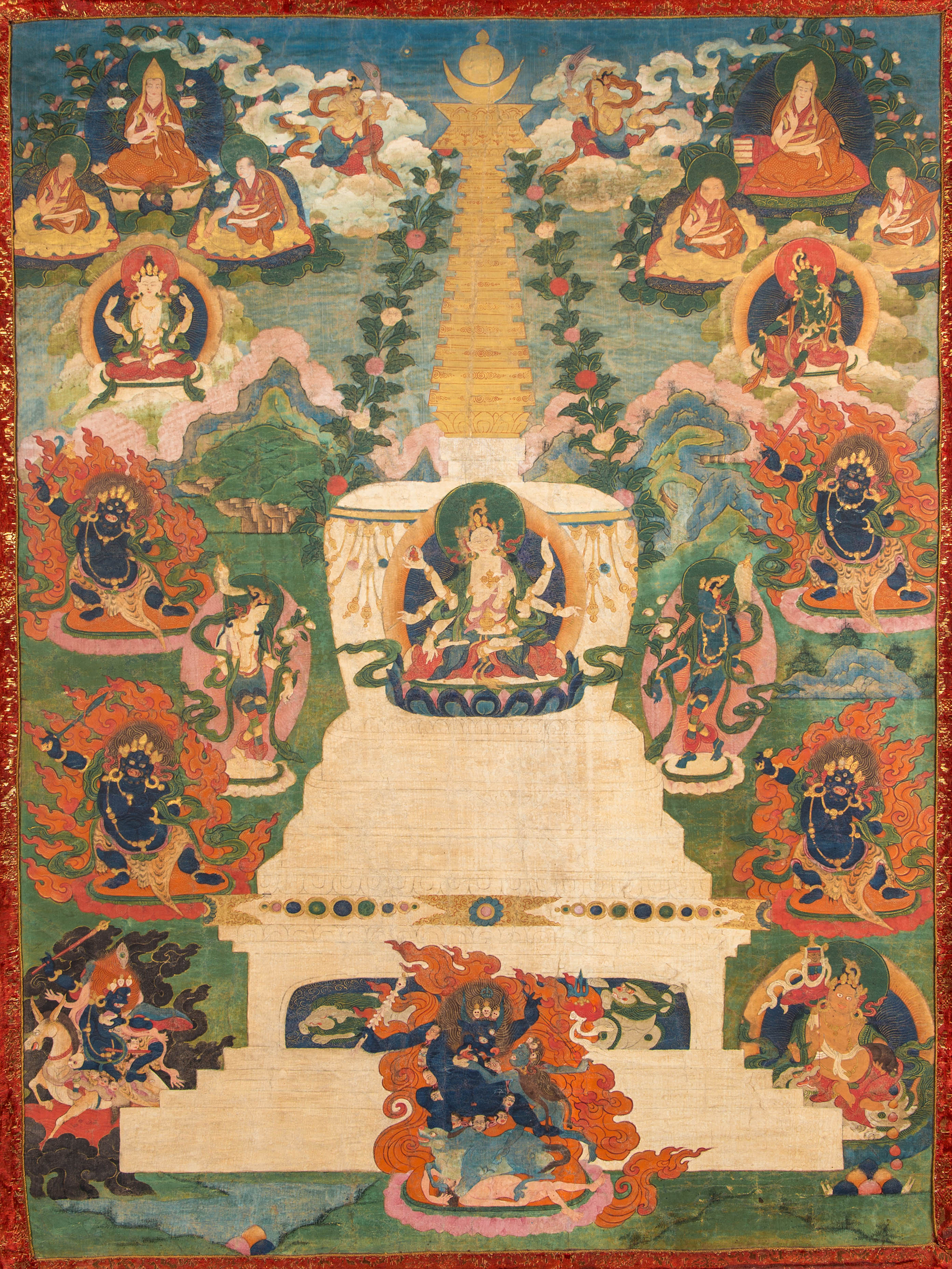 Ushnishavijaya (Tibetan: tsug tor nam par gyal ma. English: Victorious Crown Ornament): goddess of long-life, white in colour, with three faces and eight hands, seated inside an architectural structure called a stupa, or chaitya. Ushnishavijaya is so named because she is an emanation of Shakyamuni Buddha. She appeared from a ray of light that was emanated from the crown ornament (ushnisha) of the Buddha.

“…Ushnishavijaya, the colour of an autumn moon, with three faces, white, yellow and blue and eight hands. Each face has three very large eyes. The first right hand holds a vishvavajra, second a white lotus with Amitabha [Buddha] residing, third an arrow and the fourth in [the gesture of] supreme generosity. The first left holds a vajra lasso, second a bow, third [in the gesture of] bestowing protection and fourth in [the gesture of] meditative equipoise holding an auspicious nectar vase; complete with silks and jewel ornaments, seated in [vajra] posture. Within the outer circle of the stupa, on the right [side of the chaitya], above a moon is Avalokiteshvara with a body white in colour, the left hand holds a lotus. On the left [of the chaitya], above a sun is Vajrapani, blue, the left hand holds an utpala with a vajra; standing in a peaceful manner and adorned with silks and jewels.”

“On the right, above a moon is Avalokiteshvara with a body white in colour, the left hand holds a lotus. On the left, above a sun is Vajrapani, blue, the left hand holds an utpala with vajra. Both, for the right wave fly whisks, stand in a peaceful manner, adorned with silks and jewels. To the east is blue Acala brandishing a sword, south blue Takkiraja with a hook, west blue Niladanda with a stick and north, blue Mahabala with a trident. Also, with the left all perform the wrathful gesture at the heart, wearing jewel and snake ornaments, a lower garment of tiger skin, on a lotus and sun seat with the left [leg] extended in a wrathful manner. Above the main [deity] in the two directions are Devaputras holding nectar vases for cleansing the body.” (Jamyang Khyentse Wangpo, 1820-1892).

At the upper left are Tsongkapa (1357-1419) and his two principal disciples. Below that is aseated Chaturbhuja Lokeshvara. At the upper right are three unidentified teachers wearing monastic attire. The two prominent teachers on the right and left both wear a yellow pandita hat common to the Gelug tradition of Tibetan Buddhism. Below that is a seated Green Tara with the proper right leg pendant.

Three protector deities are depicted in the lower composition. They are unrelated to the practice of Ushnishavijaya but are however related to the religious tradition that the commissioner of the painting belonged. At the bottom center is the protector deity ‘Outer’ Yama Dharmaraja standing atop a buffalo. At the bottom left side of the stupa is Shri Devi Magzor Gyalmo. On the bottom right side is Vaishravana Riding a Lion.