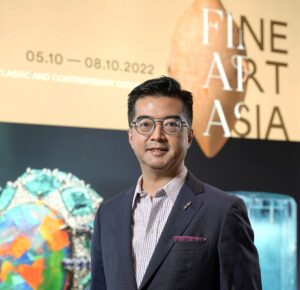 Andy Hei is a Hong Kong-based professional dealer with 30 years’ experience in the appraisal and conservation of classical Chinese furniture. He is the second generation of the prominent H.L. Hei family, which has dealt in huanghuali and zitan furniture from the Ming and Qing dynasties for over 70 years.

In 2006, he established Hong Kong’s first annual fine art fair, International Asian Antique and Art Fair, which was renamed Fine Art Asia in 2010 and is now recognised by the international art world as the most distinguished and influential fair of its kind in Asia. In 2015, Andy founded Ink Asia, the world’s first art fair dedicated to ink art, which has also won acclaim. Since 2014, in partnership with Guardian Art Centre, Andy has organised the Guardian Fine Art Asia fair in Beijing.

Andy plays a prominent role in promoting art and culture in Asia, providing professional advice for overseas dealers and galleries on developing art business in the Asian market, and educating young Asian collectors. He has given numerous lectures at major art and cultural institutions; and contributed to many international art journals and media.

In 2015, Andy was appointed inaugural Chairman of the Hong Kong Antique and Art Galleries Association (HKAAGA) which aims to raise Hong Kong’s art market to a higher level of recognition.

From 2012 to 2014, Andy served on the Exhibition Centre Committee of the West Kowloon Cultural District Authority. From 2017, Andy has served as a Council Member of the Hong Kong Arts Development Council. In 2019, he was appointed a Trustee of Friends of Hong Kong Museum of Art.

In 2020, Andy was appointed a Member of the West Kowloon Cultural District Authority Board, as well as a member of the Advisory Committee on Admission of Quality Migrants and Professionals.

In 2021, Andy was appointed as a Member of the Board of Hong Kong Palace Museum, Public Private Partnership Projects Committee and Performing Arts Committee.

Warren Cheng is a Hong Kong-based, third-generation antique dealer specialising in Chinese archaic art. His gallery, Wui Po Kok, was founded in the 1980s and has been active throughout the world. The gallery deals in a wide range of art forms, ranging from pottery and bronze vessels to sculptures and scholarly ceramic objects. In the few decades of its operation, the gallery has successfully helped prestigious international collectors and museums alike to reach new heights in their collections of Chinese art. Warren Cheng is also a co-founder of the Hong Kong Antique and Art Galleries Association.

Warren Cheng holds an MA in Comparative and Public History from the Chinese University of Hong Kong, and an MA in Buddhist Studies from the University of Hong Kong. He attended Brown University, graduating with a Bachelor of Arts degree in Economics and then worked for the Boston Consulting Group. In recent years, he has been working to blend antiques and technology, in order to present the ancient arts in a new light.