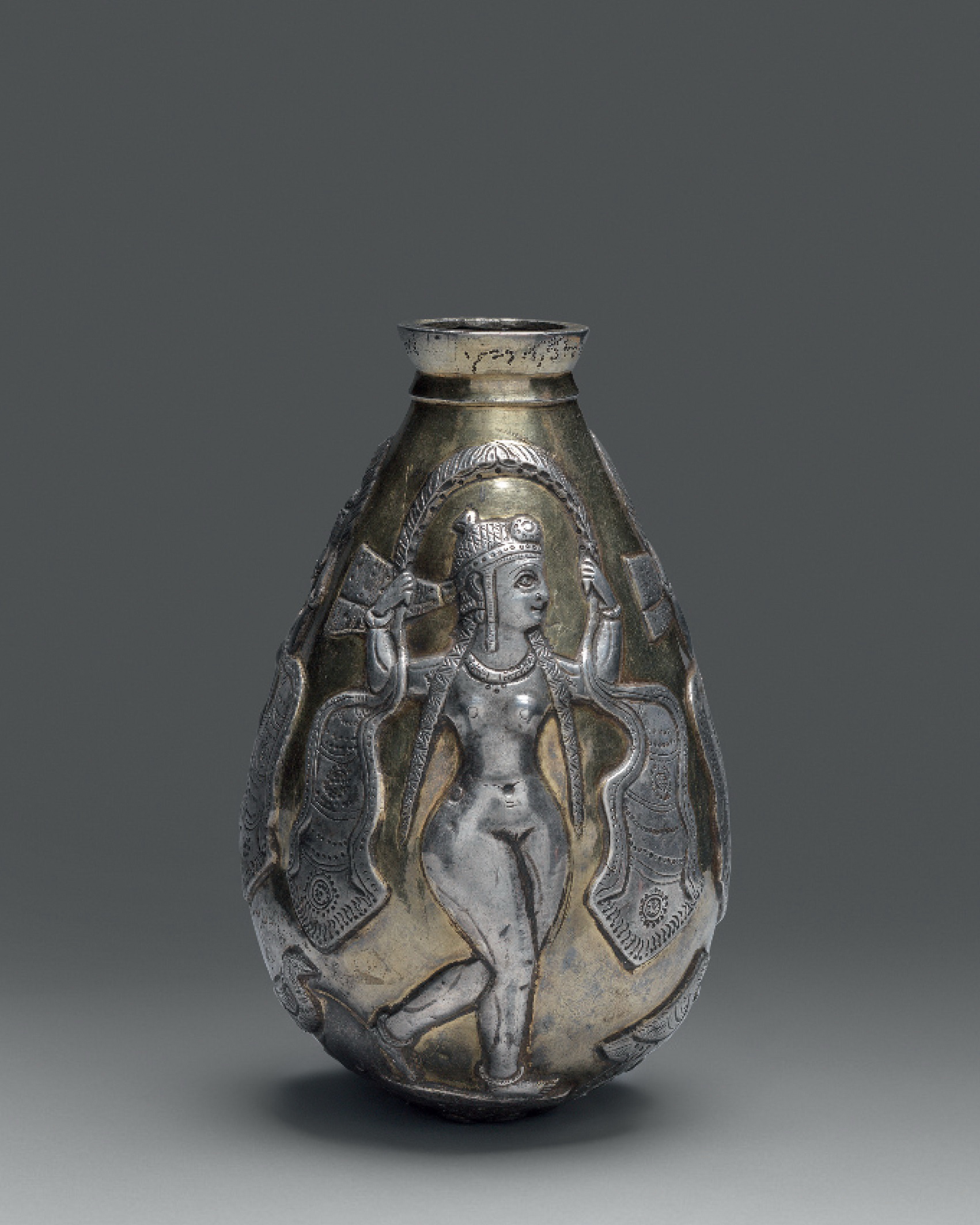 The Sasanian Empire was the last great civilisation of Iran before the rise of Islam, ruling from 224-651 AD., as one of the world’s great powers alongside the early Byzantine Empire for a period of more than 400 years. Regarded as the peak of pre-Islamic Iranian history, the Sasanian people went on to have great influence on later Islamic culture, and in particular their artistic output, whilst simultaneously having a strong influence on Roman, Indian, Chinese and African art, and later European Medieval art.

This dazzling and delicate Sasanian gilded silver bottle exemplifies the fine metalworking coming from the workshops in Iran. Globular in form and resting on a round base, with tapered shoulders, concave neck and inscribed rim, its alluring almond shape is beautifully proportioned. The body of the vessel depicts three dancing nude female figures, who move evocatively around the bottle, holding fluttering mantles that stream in the air. Adorned with thick necklaces, elaborate headpieces, and long beaded tresses that flow to their hips, they cut a sensual and rhythmic figure. The imagery, charged with sexual provocation, suggests an adoration of the female form – dancing ladies like these would serenade guests at courtly festivities. Examples have been found of Sasanian silver bottles that depict Roman inspired Dionysiac motifs, suggesting an interest in revelry, wine-consuming and sexual pursuits was prevalent in their culture, but also that a harmonious relationship could exist between neighbouring empires that were happy to borrow each other’s visual iconography to decorate their wares, exemplifying a Sasanian taste for the exotic.[1]

Modelled in a repoussé technique whereby the thin and malleable silver has been hammered from behind and chased on the front to create a low-relief on the surface, it exhibits the expert skill of the artisan who not only knew the material properties of the metal and how to effectively work it, but employed a creative use of the bottle’s shape to accentuate the curves of the female figures, cleverly working the pictorial space. Silver was a highly prized metal during the Sasanian Empire, often listed near the top of courtly inventories, and defined by its weight in bullion.[2] Such costly vases would have once graced the opulent tables of kings or princely rulers as conspicuous displays of power and wealth, enhancing their prestige, and perhaps also formed part of a complex diplomatic gifting economy.

Sasanian glided jars can be found in the collections of the State Hermitage Museum in St. Petersburg, The British Museum in London and the Miho Museum in Kyoto. Two fine and similar examples are in the Shelby White and Leon Levy Collection in the Metropolitan Museum of Art in New York.[3] The most similar however, is a particularly striking example in the Cleveland Museum of Art in the States[4]. Of almost identical size and proportion, it also has a decorated band of female gilded nude silver dancers, who work their way around the body of the bottle. One of the figures holds fruit and leaves, suggesting either a Dionysiac link, or a ritual of nature occurring. Both this nude female, and the figures on this example wear bangles around their necks, ankles and wrists as they move, one foot raised, hips cocked, in a dancing formation. The two artefacts combined speak of a Sasanian love for festivities, the nude female body, and fine, illustrious goods made from precious materials. Exquisite in detail and quality, the similarities between this bottle and those found in public collections, highlight this as a museum quality piece.

Condition
Some natural weathering and minor areas of damage otherwise in excellent state of preservation.

[3] D. von Bothmer; Glories of the Past: Ancient Art from the Shelby White and Leon Levy Collection, The Metropolitan Museum of Arts, p.60-62.

Bibliography
D. von Bothmer; Glories of the Past: Ancient Art from the Shelby White and Leon Levy Collection, The Metropolitan Museum of Arts, p.60-62.