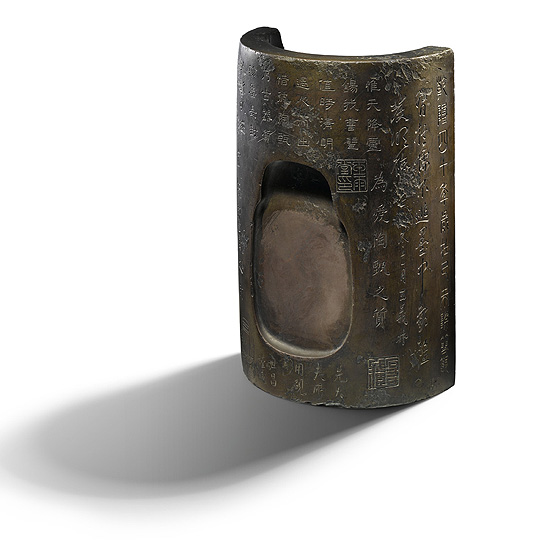 The thickly patinated duan stone is of a deep purplish-brown tone. The inkstone shows some age crackle and it is carved into the shape of a semicircular rooftile. Various carved inscriptions cover the entire length of the inkstone surrounding the elliptical inkwell beneath a moon-shaped depression and testify to its long provenance. The bottom of the inkstone reveals the characters ‘jian’an shiwu nian’ 建安十五年 (Fifteenth year of the Jian’an Era, equivalent to 210 CE) carved in high relief above a recumbent water buffalo.

The shape of the inkstone originates from the coveted ceramic tiles of the Han dynasty which were converted to inkstones in the same period. Ceramic tiles were appreciated for their smooth texture. Imitations of such shapes in duan stone began in the Song dynasty continuing well into the 18th century with the trend for archaism. The tradition of adding inscriptions to inkstones is similar to that of colophons on paintings and calligraphy.

The grass script inscription at the far left states, 壽古而質潤，色正而聲清， 超墨益毫，故其寶也。‘Though of great antiquity its material is glossy, the colour right and [rapped on] the sound is clear. The transcendent quality of its ink is more than good enough for the finest brush, and this is why it is such a treasure,’ — 襄陽米芾銘‘ Inscribed by Mi Fu (1051-1107) of Xiangyang.