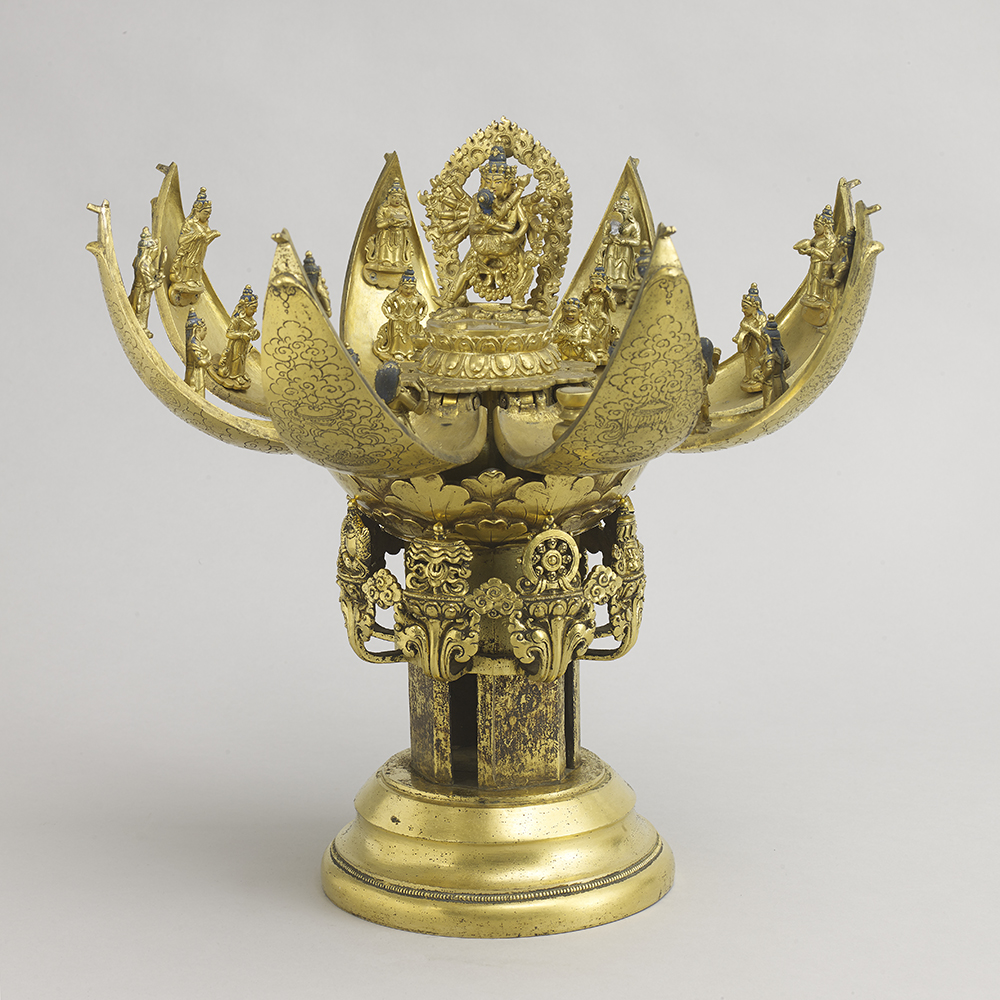 This exceptional sculpture represents the pinnacle of Mongolian bronze sculptural production. The lotus mandala is a three-dimensional representation of a deity, in this case, Chakrasamvara and his consort Vajravarahi, and retinue figures inside a lotus blosson. When closed, the petals form the shape of a lotus bud; when opened, the bud unfolds into eight petals, revealing the central deities: Chakrasamvara embracing his consort, Vajravarahi. This stunning example features an ingenious mechanism that allows the petals surrounding the central deity to open and close. Exceedingly rare, it is only one of two similarly engineered lotus mandalas to have merged from Khalkha Mongolia.

It is the engineering and design of this lotus mandala that make this sculpture truly extraordinary. The lotus stem takes the form of an eight-sided cylinder surrounded by a ring that is decorated with the eight auspicious symbols, each positioned directly below a petal. The ring is connected to the petals via a central rod that is hidden within the lotus stem. Moving the ring up pushes the petals up, causing them to fall open. A delicate balance between the weight of the petals and the weight of the ring keeps the petals from closing on their own. Pushing the ring back down towards
the base draws the petals closed.

The sculpture is attributed to the Atelier of Zanabazar, which is named after one of the most revered religious leaders and artists of Mongolia, Jebtsundamba Khutuktu Zanabazar (1635 –1723). Distinguished in the realms of politics, literature, the arts and engineering, Zanabazar travelled to Tibet in 1649 where he studied medieval Nepalese and East Indian images housed in monasteries. On his return to Mongolia in 1651, Zanabazar established an atelier which created stunning bronze sculptures with the unique and recognisable flair that has become synonym with his aesthetic. Stylistically, Zanabazar’s sculptures present a synthesis of ancient aesthetics. With Zanabazar’s innovation, image making of this period reached a peak in its artistic level.

The wide, leafy petals with scalloped edges at the base of the globe are characteristic of Mongolian works produced during Zanabazar’s lifetime. The tiny beading along the foot of the circular base also is characteristic of Mongolian works of this period. Known to have been a gifted engineer, it is possible Zanabazar himself had a hand in the creation of this precision-made work which exemplifies the artistic heights achieved in 17th–century Khalkha Mongolia.