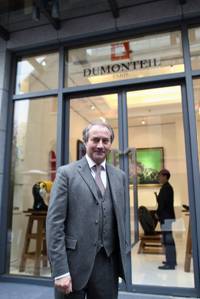 Pierre M. Dumonteil, an expert on modern and contemporary sculpture, established his gallery, Galerie Dumonteil, in Paris in 1982 and has since also opened galleries in Shanghai and New York.

Mr. Dumonteil’s passion for sculpture traces back to his family background in tapestries, which he sees as an art of transformation. In a similar way, sculptures embody an exceptional blend of art and craftsmanship.

Galerie Dumonteil was the pioneer gallery specialising in figurative sculptures, bringing the greatest artists of the 20th century to art lovers all over the world. The gallery has a particular focus on artists who have dedicated their work to animal themes, such as Bugatti, Giacometti, Guyot, Pompon, Artus and many others. Galerie Dumonteil also focuses on the colonial theme, the human figure, and increasingly important works by contemporary animal sculptors.

For the last 20 years the gallery has exhibited in major fairs all over the world, usually about nine fairs a year, mostly in Palm Beach, New York, Miami, London, Brussels, Moscow, Abu Dhabi, Dubai, Maastricht, Shanghai and Paris.